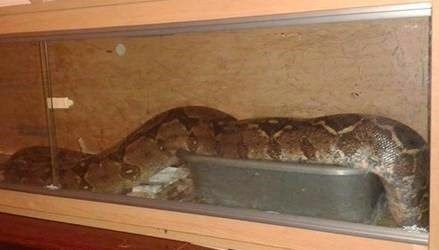 One of Kingdom’s security officers, Chris Hartley, has recently been in the news for helping to rescue and re-home a rare nine foot boa constrictor that was dumped on a freezing doorstep outside a home in Tamworth over the Christmas period.

As well as working for Kingdom, Chris also deals with exotic animals and runs an online social group called Tamworth Exotics. The tropical snake was left inside a ‘pillow case-type bag’ outside a property on Kettlebrook Road in Tamworth.

The story was featured in the Tamworth Herald which reported that:

Despite the arctic-like conditions the South American serpent was saved and has already been re-homed thanks to local reptile enthusiasts.

Chris Hartley, from online social group Tamworth Exotics, said: “I got the call on Tuesday (December 23) that a snake was dumped outside of a house on Kettlebrook Lane. It was in a pillow case-type bag and luckily it was tied up. I picked it up after a few hours and it was freezing – boas are used to exotic climates like 28 degrees in temperature.”

Knowing a lot of keen snake admirers Chris had the boa re-homed immediately.

“My friend Amy Fellows has given it a new home and he is now exploring his new surroundings”, added Chris. “She’s called him Chance because of the slim chance it had of surviving the cold at Christmas. She collects boas and this will be her third one. Chance is doing well, though, and drinking plenty of water. Only when it sheds its skin will we find out how healthy it is.”

Chris wants anyone with any information about the snake being dumped to get in touch. He said: “We are interested in its feeding, health and handling history. Please contact me on chris@socialexotics.com.” To find out more about reptiles and exotic pets or to follow Chance’s progress you can follow Tamworth Exotics on Facebook or visit www.socialexotics.com

Established in 1993 and operating nationally, commercial and service strength supported with organic and acquisition growth has seen Kingdom become one of the largest privately owned companies in the UK within their areas of service expertise. To find out more about Kingdom, please visit http://www.kingdom.co.uk/