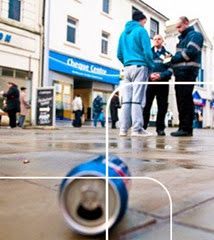 Kingdom’s Environmental Protection team apply zero tolerance to every incident of people dropping litter intentionally. This was highlighted recently by a case in Havant, where two women were fined £75 each for dropping cigarette ends.

The case was reported in local newspaper The News. After sitting down for a cigarette on a bench in Havant, instead of putting their cigarette ends in an ashtray, the ladies dropped them on the floor and walked away. As a result, a Kingdom officer gave them each a £75 for littering.

Commenting on the news story, Darren Hopkins, a supervisor at Kingdom, said: “There are no warnings. They would have had to drop the litter and walk away from it – and then we approach them. If anybody was to drop anything accidentally, we would ask them to pick it up again and show them they’d dropped it. They would not be issued if it was unintentional. It has to be deliberate.

“The £75 is payable within 14 days. It varies from crisp packets, Coke cans, and dog fouling is a big problem. On the whole we’re getting good feedback from the local residents. People are coming up to my officers and saying it is making a difference.”

Kingdom started working with Havant Borough Council in May to clamp down on people who drop rubbish on the borough’s streets and parks. The scheme was well advertised before it was launched. Five wardens from Kingdom patrol the borough along with five environment rangers from the council. Within the first three weeks of providing services to the council more than 250 fines were given out to people for littering.

The scheme has been welcomed by locals. One Waterlooville resident told the local paper “It’s a very good idea. People don’t litter their homes so I don’t think they should litter the streets. It brings the area down. The fine is very good. It will make them think twice about littering, unless they’re millionaires.” Almost all of the 54 comments from readers of the online article in The News were supportive of the scheme.

The cost of cleaning the UK streets has been estimated at £780million per year. Around 14 million incidents of anti-social behaviour are reported each year, which equates to 26 incidents every minute. Kingdom’s high profile, specialist Environmental Protection team aims to combat this, resulting in cleaner, safer and greener public areas.