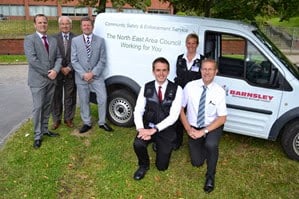 We recently reported that we’re delighted to have won four contracts to provide Environmental Protection services in Barnsley for the next 12 months, tackling litter and dog fouling on behalf of Barnsley Council. Full details of the services we are providing can be seen here.

We were pleased that an article entitled “Private enforcers brought in” about the services Kingdom are providing was on the front page of the Barnsley Chronicle on Friday 15th August. The article, by Alison Burkinshaw, read as follows:

AN ENFORCEMENT team has been set on in the north east area to clamp down on issues such as dog fouling, littering and illegal parking.

The area council, which covers the wards Royston, Cudworth, Shafton, Grimethorpe, Carlton, Lundwood and Brierly, is paying for the move.

Coun Joe Hayward, chairman of the North East area council, said getting an enforcement team in had been a priority for some time.

“They have been given maps with ‘hot spot’ areas that are being highlighted as a concern to us by residents.”

Coun Steve Green said current ‘hotspots’ are Royston and Cudworth parks, but each area within the north east has issues.

“Anyone can ring in and tell councillors what areas they think are a concern.

“This will get passed down to the enforcement team at our monthly management meetings”.

Enforcement officers Maria Broxup and James Lovatt can issue fixed penalty notices to people if they catch them littering and not cleaning up dog mess.

Maria told the Chronicle: “The penalty for dropping litter is £75 and for not cleaning up after your dog its £50.

“We can issue these on the spot. People are then given a 14 day discharge where they have the chance to pay the money, if they don’t legal action is then taken.

“We want to do everything to let people know about the new robust enforcement, so we’ve been putting up dog fouling stickers, and have updated social media.

“We don’t want people to turn around and say ‘I never knew about the new enforcement team’.”

James added: “So far we’ve been travelling around the area, and getting ourselves familiar with the hotspots.

“We’ve also had the chance to get to know the people who live around here and let them know what changes are going to be happening.”

Manager of the project in the north east, Steve Gillespie, said the enforcement officers will be going undercover sometimes to catch people out.

“We know when people spot someone in uniform they are less likely to litter, so we’ll be catching people out by not always having a uniform presence.”

Coun Hayward said he welcomed the north east area having its own enforcement team.

“This is something the public have been asking for a long time.”

Caroline Donovan, area manager for the north east, said it’s impossible to judge which part of the district has the most problem areas.

“We cannot judge at the minute as we haven’t got out own findings, it wouldn’t be fair to say.”

Jim Packer from Kingdom said: “I get a direct notification every time a ticket is issued.

“So with this information we will be able to tell what area is the worst for these sorts of crimes.”