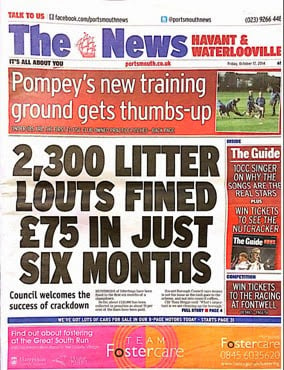 The sub headline said “council welcomes the success of crackdown” which it then followed by saying:

“Hundreds of litterbugs have been fined in the first six months of a clampdown. So far, about £120,000 has been collected in penalties as about 70 per cent of the fines have been paid. Havant Borough Council says money is not the issue as the cash goes to the scheme, and not into council coffers. Cllr Tony Briggs said: ‘What’s important is we are cleaning up the borough.’”

Kingdom has been providing environmental protection services to Havant Borough Council since May this year, and is delighted that as a result of the successes so far, the initial contract with the council has been extended by another six months.

The frontpage story was followed by a full story on page 4 of the paper, with the headline “Zero tolerance on litter sees 2,300 fines dished out” and the sub headline “council says clampdown will continue as contract with company is extended”. The full article, which can be read online here, goes on to say:

“Almost 2,300 fines have been given out in under six months for dropping cigarette butts and rubbish and dog fouling. And Havant Borough Council’s zero tolerance approach to littering appears to be working – with some traders saying the streets are looking cleaner.

The scheme, launched in May, has been such a success that the authority has announced it is extending its contract with Kingdom for another six months. There are currently five people employed by Kingdom to patrol the streets, supported by five council wardens.

A total of 2,280 fines of £75 have been given out – equating to around 13 a day. Of these, 2,209 were given for dropping cigarette ends, 65 for general litter like chewing gum or crisp packets, and six for dog fouling. Seventy per cent of the fines have been paid – estimated, unofficially, to total just under £120,000. This has covered the cost of employing Kingdom. The outstanding fines – around 680 and estimated to be worth about £51,000 – will be sought through the courts.

Councillor Tony Briggs, who heads environment, said none of the cash goes into council coffers and it all goes into employing wardens and the administration costs of pursuing the fines through the courts.

Wendy Lake, manager of La Bonne Baguette in West Street, Havant, said: ‘Havant looks a lot cleaner and a lot tidier. I can honestly say they don’t target the people sitting at my tables. Sometimes if it’s windy a sugar wrapper can fly off and they don’t do anything because they know we will pick it up. It’s a steep fine though. Some poor woman’s kid dropped a balloon and she didn’t go and pick it up – she got fined £75. But it’s making people think twice. I think it’s a good idea.’

But Mike Joines, who owns Zoom Hairdressing in Park Parade, Leigh Park, said there were still lots of cigarette butts on the streets. He said: ‘I would like somebody up here full-time. I don’t think they are up here enough.’

Cllr Briggs told The News: ‘The money is totally unimportant – what’s important is we are cleaning up the borough. It’s not costing the taxpayer a penny because the fines are paying for the service.’ He added that dog fouling would be the next target for the wardens.” Kingdom is very pleased with the results so far, is delighted that the council is happy with the way the initiative is working and that they have extended the contract as a result.

Kingdom is also proud that the efforts of their officers are helping to make the borough’s streets cleaner and safer for residents and visitors alike. As a result of their efforts so far in Havant, the environmental protection team was recently awarded Team of the Month at Kingdom, and are profiled here.