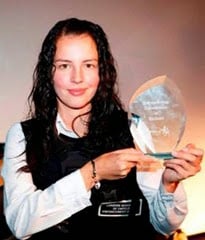 Kingdom is delighted to announce that one of their environmental protection officers, Jenna (pictured right), has been nominated for a prestigious London Leadership and Peace Award by the Leader and Chief Executive of Enfield Council. The nomination is in the “Individual - Courage Award” category, and the council have nominated Jenna in recognition of her actions in helping to catch four suspected muggers who attacked an elderly lady back in September.

Jenna works as an environmental protection officer at Kingdom, patrolling the streets of the North London Borough of Enfield on behalf of Enfield Council. She was out on patrol when she spotted four suspected muggers running from the scene of an alleged attack where they had allegedly tried to steal an 84-year-old woman’s handbag, dragging her to the ground in the process.

On witnessing the incident and hearing a member of the public shouting for help, Jenna chased the group while simultaneously filming the pursuit on her body camera and giving a running commentary to the police on her mobile phone, who talked her through what to do. The group split up when they realised they were being followed, and Jenna subsequently stopped two members of the group and returned them to the town centre where they were arrested by police. The other two were arrested nearby by other officers. All four were charged with attempted robbery and assault. The victim required medical attention at the scene, but was thankfully unharmed following her ordeal.

Commenting on what happened, Michael Fisher, Head of Environmental Services at Kingdom, said: “We are incredibly proud of Jenna. All of our litter wardens wear real time body cameras as part of our work to reduce street litter, but Jenna has managed to use her kit in a brave and courageous way, serving wider community interests. She is a great asset to the team.” 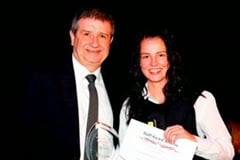 Before she was nominated for this prestigious award, Jenna also received a Staff Excellence Award from Enfield Council in recognition of her actions, and was presented the award by the leader of the council, Councillor Doug Taylor (pictured right). Enfield Council’s Cabinet Member for the Environment, Cllr Chris Bond, said: “Jenna is a credit to Kingdom and to Enfield Council. She demonstrated initiative and bravery by single-headedly chasing down and tackling a gang of criminals who were suspected of committing a cowardly assault on a defenceless pensioner in broad daylight.”

The London Leadership and Peace Awards 2014 are being held at City Hall in London on Wednesday 10th December to “celebrate the outstanding contribution of Londoners and London organisations”. Jenna has been invited to attend the award ceremony with up to 5 guests. The event is described as an opportunity to celebrate what’s great about London and “to nominate and recognise individuals and organisations that tirelessly make a visible and tangible difference in the world’s greatest and most diverse capital!”

The Individual – Courage Award, which is the category that Jenna has been nominated in, is to recognise “an individual who has shown bravery in the face of danger; resilience in overcoming adversity; or demonstrated extreme grace and forgiveness in extraordinary situations.” The event is being co-hosted by the Peace Alliance and the Greater London Authority, and is being supported and attended by the Mayor of London, Boris Johnson. For more information about the London Leader & Peace Awards, please visit www.leadershipandpeaceawards.london

Kingdom has worked with Enfield Council since 2009 to help the council clamp down on people who drop rubbish in the borough’s streets and parks. Four wardens from Kingdom patrol the borough and are empowered to issue Fixed Penalty Notices (FPNs) to offenders who are seen breaking the Environmental Protection Act 1990 in streets, parks and open spaces.