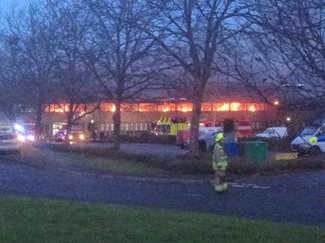 During the early hours of Thursday 15th January, Kingdom’s Natalie Murphy, who was on duty as part of the South Operations Team, received a number of alarm activations relating to the same assignment. Natalie quickly realised that this activity indicated that a serious incident was under way and passed the details to Duty Mobile Response Officer Lee Dorey.

Lee accepted the details and arrived at the site within 15 minutes of receiving the call, at the same time as the deployed police unit. Upon arrival, Lee and the police found the building ablaze. Lee worked with the emergency services to cordon off the area and manage access control whilst the fire brigade continued to fight the blaze.

Natalie quickly realised that the incident would prevent Lee from managing the rest of his mobile duties and so took control and implemented a plan to mitigate the impact on other mobile clients. She arranged a strategic relocation of resources to facilitate collection of the necessary instructions and keys, and Duty Mobile Response Officer Steve Peters assumed not only his role but also that of his colleague, underpinning the excellent services that the Southern Area Mobile clients are used to receiving.

Natalie called her South Ops colleague Michael O’Keeffe who came into work an hour early to relieve her so that she could attend the incident in her own vehicle and provide further much needed support to Kingdom’s client. Both Natalie and Lee supported implementation of the client disaster recovery plan, which included managing access control, advising client employees on their arrival at the scene for their “normal working day” of the issues faced, and issuing them with client provided instructions. Operations Manager Beccy Ronald also attended the scene and provided additional support to the client.

Kingdom’s response to this major incident was an excellent example of effective teamwork and communication, and all of the team were highly commended by their client for their support under such difficult circumstances. The way the South Ops team effectively supported the client at such a critical time is an indication of their professionalism, and the ability of Lee to remain calm and professional in particular was commended by the client.

The fire, which has been confirmed as part of a spate of arson attacks, involved a vehicle containing a number of gas canisters being driven through the front entrance of the client premises and ignited. A man has been arrested in conjunction with the incident. The incident was a national news story, and you can read more about it on the BBC News website.