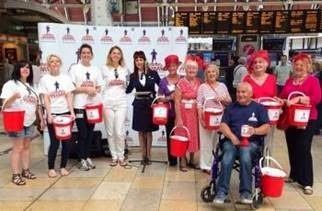 A Kingdom employee and former soldier is fundraising to raise money for a charity that helps to look after the UK’s armed forces when they return to civilian life.

John Barrett, who joined Kingdom in February this year as a regional manager in the company’s retail division, is taking part in a charity collection day on Friday 8th May at Victoria Train Station in London for the Coming Home charity.

Coming Home is the fundraising campaign for the charity Haig Housing Trust, and aims to provide tailored housing solutions for the UK’s severely wounded soldiers. May 8th will also be the 70th Anniversary of VE Day, and so will be a particularly poignant and memorable day for current and former members of the armed forces. The charity will also be holding a collection day at Waterloo Train Station in London on the 6th May, and often has fundraising activities going on throughout the UK.

John served in the Coldstream Guards between 1990 and 2001 and saw active service in a variety of locations around the globe, including the Gulf, Bosnia and Northern Ireland. Speaking about his involvement with the Coming Home charity he said:

“This is something that is quite personal to me as a former soldier. I know how alone you can feel when you first come out of the army, and if Haig Homes had not been there for me, my family and I would not be in the position that we are now.

“I got involved with Coming Home as I have a few old comrades who were not as lucky as me and believe it or not there is actually very little government funding for this sort of thing. Nearly 70% of the funding for veterans comes from charities like Coming Home and Help for Heroes.

“I am seeing more and more veterans being discharged because they are not longer fit for service, as we still live in a Haig Homes property, so they become my neighbours.”

Haig Housing is one of two strategic partners of Help for Heroes. Any housing needs and cases found by Help for Heroes is referred to Haig Housing as the specialists in housing for service and ex-service people. Many badly injured ex-servicemen have already been provided with a home for life through the Haig Housing Trust and the Coming Home campaign, and they continue to fundraise to keep providing homes that are appropriate and suitable for their needs, and provide a platform for badly injured servicemen and women from which to rebuild their lives.

For more information about the Coming Home charity, please visit http://www.coming-home.org.uk/. If anybody would like to donate to this charity, they can do so by visiting the web address above, or by sending donations to the following address: