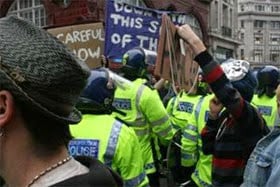 Kingdom has been notified that a planned protest and vigil about the actions of Israel in Gaza will take place this evening, Tuesday 29th July 2014, between 5pm and 7pm in Richmond Terrace, opposite Downing Street. The event has been organised by the Palestine Solidarity Campaign UK.

Demonstrators are expected to gather from 4.30pm onwards, and approximately 300-500 people are expected to take part. It is expected that the protest will result in an increase in noise levels and footfall in and around the immediate area.

The Metropolitan Police recommend reading the details here in case you encounter a protest in or near to your building.